[EDITOR'S NOTE: I'm not gonna lie, I just dead-ass forgot to upload builds to itch the past 2 weeks. That's my bad. Here's the entirety of Major Update #5 for you guys!]

Hey there! This week, we had a late start with our Weekly Pupdate, but I think you'll find that it was worth the wait. Major Update #5 is here! We have a ton (seriously, a LOT) of changes in this changelog, so I’ll make sure that we go over the changes by category after the jump.

But that's enough talk-- let's get into it, shall we?

Whew! That's a lengthy one, eh? To go over this in more read-able form, I'll break these down into a few categories: New Content, Quality of Life, Balance, and Bug Fixes. Let's start with the one that caused the long delay between content drops, New Content.

Major Update #5 brings three new zones to Ephemeral Tale for you to explore, new enemies for you to fight, new gear to collect, new bosses to conquer, and new easter eggs to discover!

You'll face new challenges inside of the Graveyard Grove, Bayou Bog, and Royal Rosegardens that will encourage you to change up your equipment in new ways, and bring your fellow adventurers along that perhaps got overlooked on your first go around.

Additionally, there's a few added story scenes that I hope help with addressing the initial light-weighted nature of the narrative, with the caveat that I'm still not aiming to tell a large, epic story in the same way that most JRPGs do. But I think we've gotten ever closer to a great middle-ground!

With new content, comes the ability to fix up older, more legacy content. Let's talk about some of the Quality of Life changes that arrive with this update.

First and foremost, almost every single combat background scene in the game has been remade-- the ones that didn't quite make it are listed in the full patch notes, and are on the list of things to get done in the immediate future. This change alone will bring a level of consistency to the overall game that has been relatively absent to this point, but we've still got strives to make.

Additionally, some changes have been made to the presentation of the boss HP bar in combat as well: 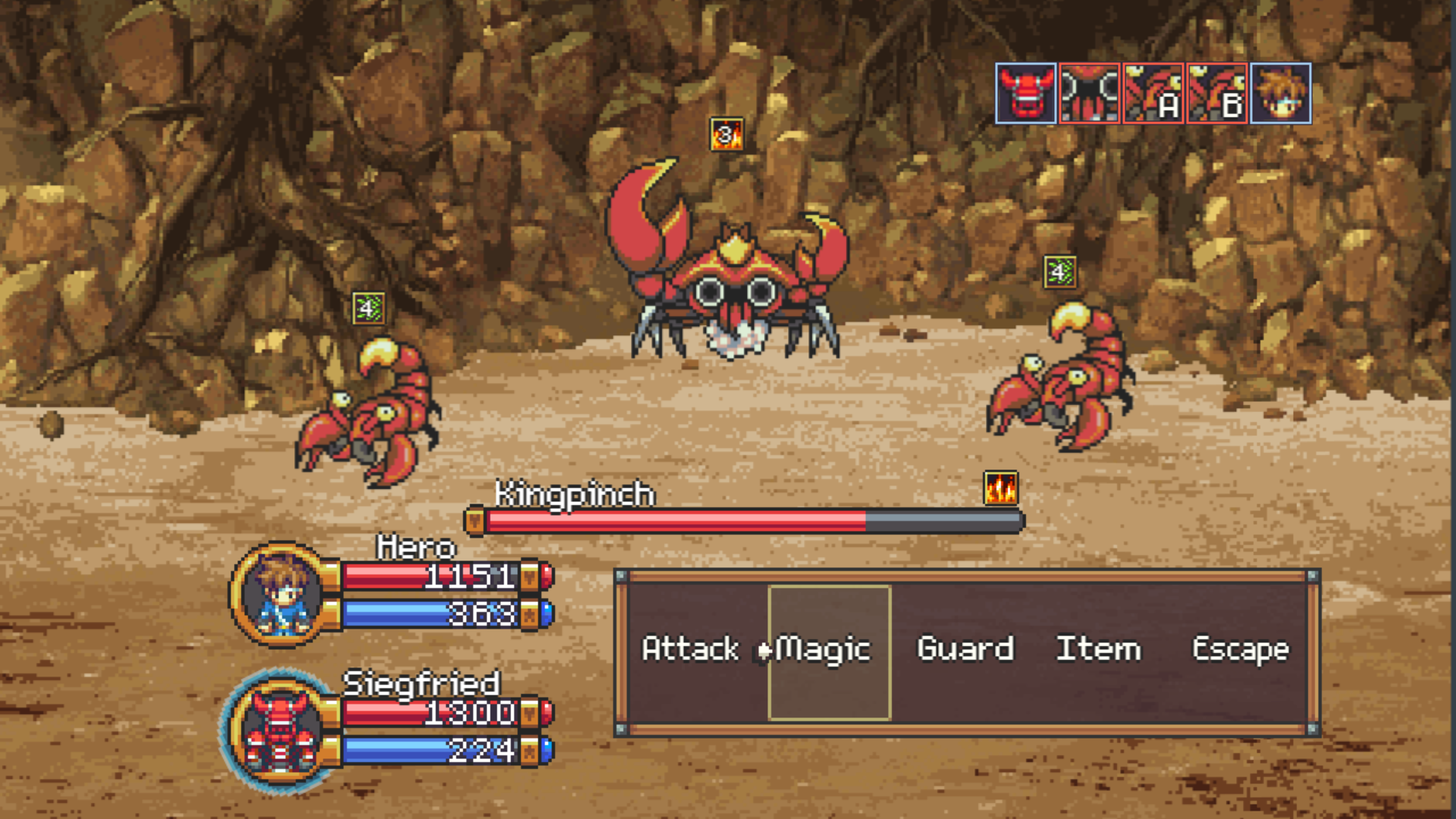 You'd be crabby too if you were on fire.

While in combat with a boss, their status ailments will now be clearly visible and listed above the health bar, as seen above. There was some behind-the-scenes changes to how these bars and status' are displayed as well, but it's not super relevant to the overarching QoL section.

When combat background scenes got redone, it became clearly evident that I'd have to also re-do some other assets in the game as well. These are things like the zone banners, the portal doorway animations, and things that otherwise were based on background scenes in some fashion. Long story short? Lots of new and re-done assets that should help the game feel much better.

This is a chunky one, so let's start with a hybrid QoL/Balance change: Darune is now tied to the Crypt of Kings initially, and is unleashed by your entry into it's deepest halls. One thing that became abundantly clear while watching gameplay from you guys and talking with you, is that this guy (who was supposed to be a relatively rare, hidden encounter) was almost a given for a player when going through the game. By moving him into a hidden, secret area, I've hopefully accomplished two goals: making the Crypt more worthwhile for you as a player, and stopping the boss from be an unexpected experience. You will clearly know why you're seeing the Lord of the Sands while you're out-and-about. For players with existing saves that are worried about this, no worries: simply go into the deepest room in the Crypt, and he'll begin to spawn in your Oasis once more, forever haunting you with his big, thicc loot pool.

On the gear side, we've got a number of changes meant to reel in some of the more absurd equipment pieces in the game. Additionally, I've made an attempt to bring one of the most under-performing equipment pieces up to par with other, similar pieces. Ideally, these changes will help encourage build variety without stifling your existing characters.

On the consumable side, there have been a number of changes to potions, magic waters, and scrolls of power-- they're less common, and they're less effective in some cases (looking at you, scrolls of power). The goal of these changes, along with the tuning of MP/HP related gear as mentioned above, is to better fine-tune the mana economy and HP economy in the game. Hopefully, this will lead to the choices you make feeling more meaningful.

The final boss has also gotten a major buff to their effectiveness against the player, and other changes made in the back-end should also mean that existing bosses are a little bit tougher as well. I'll continue to keep an eye on boss encounters, but feel free to send feedback that you have regarding them (or any portion of the game, really) and I'd be happy to give it a look.

Finally, to wrap up the balance section of this Pupdate, once you've entered the Realm of Shadows you may find that the enemies of the prior zones have become strengthened. This is intended, and is to keep a line of relativity reasonably discernable while you're writing your path in Ephemeral Tale.

And to round out this psuedo-organized, stream-of-consciousness style of writing, we have a handful of bug fixes, ranging from small (text not being properly centered, various cases of ".." instead of "...") to major things (encounter delay rate being lower than intended, issues where unimportant data could become corrupted and spew garbage at the player). These kinds of things are generally not so fun to talk about, and even less fun to read about. If you're interested in the specifics, feel free to read the patch notes above or ask me about a particular one if it tickles you!

This was a lengthy Pupdate, but an important one! If you run into any issues while exploring the new areas (or old), I earnestly encourage you to report it via the normal methods (Twitter, Discord, forums, email, etc.). I'd love to hear your thoughts, both negative and positive on the direction Ephemeral Tale has taken and where you'd like to see it go. But for now, I'll let you get into the new stuff!

Until next time, stay safe and have fun!
-- Ryan
Join our Discord: https://discord.gg/jpStbUf