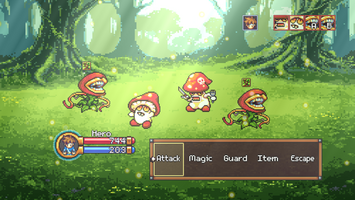 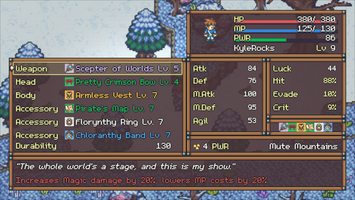 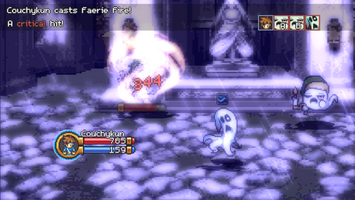 This week, we deepened the gameplay of Ephemeral Tale through the addition of a skill tree. These changes went through a good 3 weeks of testing, but you guys will easily eclipse that amount in the first day of playtime under this system, so I’m sure there’s going to be hiccups and bumps along the way with regards to balance. Feel free to tweet at me, email me, ping me on Discord, or post in the forums with feedback! As of today, you should find that there’s a new balance feedback thread up for these sorts of things, if that's more your style. Now, shall we hop straight into the juicey-juicey?

There’s a lot of tech behind the new skill tree that I wrote about a couple of weeks back-- lots of loading new files, attaching them to the save file, stuff of that nature. While wrapping up this patch, I began to experiment with a re-instantiation method, as I wanted to test out what would realistically happen if I had to change the skill-tree in a future patch. This experimentation part of development is always crucial, as it helped me learn a number of things:

2.) If we let the tree live on the character itself, we can just "reset" the character
I'm not gonna lie, this one surprised me! Turns out, you can have multiple versions of the skill-tree living in harmony by having the characters data hold the tree, rather than just holding a reference to it. Then, if you need to update the tree, you just treat it as a new tree entirely by re-instancing the player character! re-instancing the player character is a lot easier than you'd think-- granted, it still has its caveats.

All of this ties into the biggest revelation:

4.) Through this method, we can actually maintain compatibility with legacy saves
Yes, it's true! I've tested this across several of my own saves, and saves from the community. I've had a 100% success-rate in being able to get these up and running under the new patch, so the previously announced save-file breaking is officially cancelled.

Yep, your legacy save files will continue to work! I didn't think that they would (hence my saying as much a few weeks ago), but I was able to get it functioning. There will still be sore spots, of course-- for those who are pretty deep into their runs, you may find that Scrolls of Power are now a fantastic way for you to put a dent in the skill tree.

We're finally at what I believe to be a major turning point in the development of Ephemeral Tale-- the major gameplay systems have continuously been improved & iterated upon over the past several months, and I'm now able to buckle down and develop side content to continuously deliver fresh items and gear on a more regular basis. Next week will bring another new quest, and I presume balance changes as well.

So, if you would be so kind, leave me some feedback! What you like, what you dislike, what you wish for, and I'll see what I can do! Until next time, stay safe and have fun!